​They had the following 11 children: They are buried together in Bathurst. 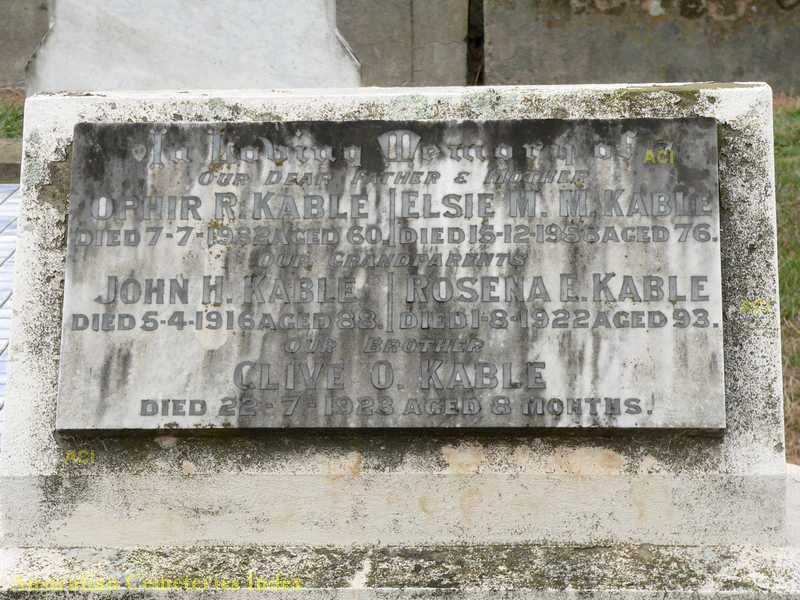 Days of the Tank Stream.

The lifetime of Mrs. John Henry Kable who died at Bathurst recently at the age of 93, spanned Sydney’s development from a humble township to a great city. Born in O’Connell Street in 1829, she paddled in the Tank Stream (Tank Stream about 1920 – picture left

) as a girl, and lived to see grow over that creek one of the great cities of the British Empire. Bound up with her life history are many of the most interesting happenings in the early life of the colony.

Mrs. Kable was one of a family of 15, and she was born in a house which fronted O’Connell Street, on the site of the present Chemical Warehouse of Elliott Bros. Limited. Mrs. Kable in her girlhood was very fond of playing in the stream. In later years she often talked of the fine patches of corn and the vegetable gardens that then lined it, and she had a clear recollection of having often run over the bridge at about the spot where Bridge Street intersects Pitt Street.

Her mother was born in the same house in O’Connell Street, and the latter’s father, John Manning, was one of the first contractors in Sydney and was responsible for the construction of many of the original wharfs in Sydney Cove. Mrs. Kable’s father, John Mills, was an early schoolmaster, and conducted schools in several places notably Parramatta. A large number of men of that generation including the late Mr. G. Withers later member for that Electorate received their tuition from Mr. Mills. His last school was at Lower Kurrajong. He died in 1865 and is buried in St. Peter’s Churchyard. Richmond. It was at that town that the late Mrs. Kable met he husband. He also was a descendant of the pioneers being a grandson of Henry Kable, who came out in the first fleet, and later figured prominently in what it is claimed was Australia’s earliest commercial and shipping firm, Kable and Underwood. They were large shipowners, and were engaged in the sealing trade in Bass Strait and early as 1804.

The progress of Kable and Underwood however was interrupted by Governor Bligh and his trading restrictions, and Mr. Kable got into grips with that administrator in 1807. As a result of one of these alterations, Mr. Kable was heavily fined and ordered to be imprisoned for 1 month for addressing the Governor in improper terms. At a meeting held later he placed the name of the firm at the head of a subscription list with 500 pounds for the purpose of helping to defray the expenses of sending Mr. John Macarthur to England to advocate the removal of Governor Bligh.

​At some stage in her life she went to New Zealand where she married on 27/09/1897 to Spencer William von Sturmer at St. Mary’s Catholic Church in Parnell NZ.

Spencer was 34 years older than Rebecca.
​
He was married before in New Zealand to
Sarah Kaohi Reed with whom he had 12 children.
Sarah died in 1896

After the death of his father Spencer, Neville and his mother Rebecca went back to live in Australia. They settled in Sydney area (according Electoral roll records) and Police Gazettes 1920 – 1928 regarding Neville.

In 1930 Neville showed up in the Electoral Roll for North Sydney together with Madeline Sturmer. Madeline was his mother Rebecca Jane, who added the first name Madeline to her name.

in 1980 Neville showed up in the Electoral Roll for Katoomba as a single person.

It is unknown when Neville died. There is a record for a burial of Neville Sturmer. The dates of birth and death were unknown at the time of burial.