James was born on the 19th of August 1793 and baptised on 22nd of September 1793 in the first church of the colony which had been opened the previous month, August 1793.

​He died about 30 September 1809, murdered by Malay pirates in the area of the Andaman Islands. 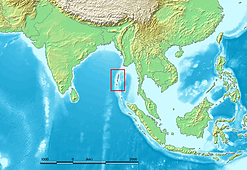 The possible marker for James resting place in Malacca.

One of the descendants, Colleen Simpson, wrote on the Facebook page:

I visited the cemetery at Malacca around 1974 and by accident came across the grave. Unfortunately I did not know about James, although I had known a little of the story of Henry, Susannah and George Esto from childhood. Regrettably no photo was taken. At that time the headstone was a slab on the ground. In recent years I had contact with someone in Malacca, however they were not able to find the gravesite.

News of the tragedy did not reach his family until the 9th of March 1811.

Below the Article in the Sydney Gazette dated 09 March 1811 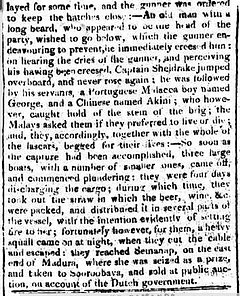 Extract from the article above:

The fate of Mr. James Kable second son of Mr. Henry Kable, who sailed from hence to China in the “Bom Cidaldao” in September 1808, having for many months past been involved in uncertainty, accounts are at length received of so upleasant a nature as to add to the disastrous events that have attended this unfortunate young man, and the companions of his voyage, fell accidently under the observations of one of his relatives in a calcutta newspaper brought in the “Campbell Macquarie”

“The brig Fly” captain Sheldrake, left Malacca on the 30th September 1809 about 6 weeks afterwards arrived at Salembo, on the coast of Java, where they touched and procure fresh water. The long boat was sent on shore with the tindal and four men, after which Mr. Kable, the owner, and Mr. Hunter, a passenger (foremerly of His majesty’s ship Dover) went on shore in a small prow belonging to the brig, in order to take the diversion of shooting, shortly afterwards some Malay men came from the shore in a prow, with 3 jars of water, and one of the lascars; when they came within hail, Captain Sheldrake enquired what boat it was, and was answered, that they brought a supply of  water, and that the long-boat would shortly follow; in consequence of which they were permitted to come on deck. Captain Sheldrake having perceived that they were armed with creeses, ordered them to leave their creeses in the boat, with whick they complied; but it was afterwards found that they were doubly armed; out of the eight men which were in the prow, 6 came on deck; when there, one of them wished to have a loiah belonging to a lascar, which Captain Sheldrake told him he could not have; they were walking about the decks a considerable time, until Captain Sheldrake observed to them, that it was time they went on shore; they, however, delayed for some time, and the gunner was ordered to keep the hatches close;- An old man with a long beard, who appeared to be the head of the party, wished to go below, which the gunner endeavouring to prevent, he immediately creesed him; on hearing the cries of the gunner, and perceiving his having been creesed, Captain Sheldrake jumped overboard, and never rose again; he was followed by his servants, a Portuguese Malacca boy named George, and a Chinese named Akini; who however, cought hold of the stem of the brig; the Malays asked them if they preferred to live or die, and, they, accordingly, together with the whole of the Lascars, begged for their lives;- so soon as the capture had been accomplished, 3 large boats, with a number of smaller ones, came off, and commenced plundering; they were 4 days discharging the cargo; during which time, they took out the straw in which the beer, wine ect. were packed, and distriputed it in several parts of the vessel, with the intention evidently of setting fire to her; fortunately however, for them, a heavy squall came on at night, when they out the cable and scaped; they reached Semanap, on the east end of Madura, where she was siezed as a prize, and taked to Sooroobaya, and sold at public auction, on account of the Dutch Government.