​She was baptised twice according to the records. Once on her birthday and a second time on 25/07/1839. There is also a birth registration for her, mentioning her birth year as 1828. 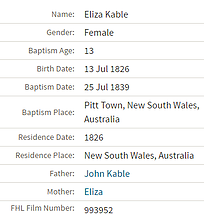 Eliza married for the first time on 25/12/1849 in Sydney to Richard Williams.

​They had the following 3 children:

​It is uncertain what happened to Richard. In some ancestry trees it is mentioned that he died in 1852 in Braidwood (no records). There is a publication in “The Empire” of 27/09/1851 that a Richard Williams died in London, Northampton Square. Was he visiting his family back in England after the birth of his youngest daughter Adeline?

William was born in 1817 in Waterford, Tipperary, Ireland. Maria was born and died (according family trees) in Braidwood, Quenbeyan in 1866.
On her birth registration no father is listed and her mother as Elizabeth.
There is no death recorded for her.