Rose was born in Wilberforce on 06/09/1848 as the daughter of John Welsh and Ann Kenton. 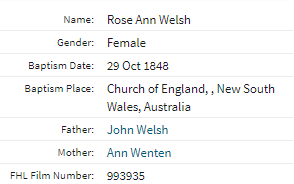 Nothing is known about John and Ann and why Rose was adopted or accepted in the Teale family.

Could it be the fact that Rose Ann was in fact the daughter of Ann Winten, who was 17 years young at the time of Rose her birth. Ann’s name on the birth and baptism record are both different and similar to her real name Winten.
A story goes that Rose was looking after her uncle Joseph some time after the death of his wife Susan Baldwin in 1856. Is there a twist in personality and is Rose the daughter of Joseph, born in 1848, and cared for by Henry and Ann?

​There is no indication Rose married. On the birth registration of her son, no father is mentioned.

​Rose died on 09/09/1929 in Wilberforce. She is registered as Rose Ann Welsh Teale and her parents as Henry and Ann.