John served the Army in WWII and was made a prisoner of War in Thailand POW Camp. 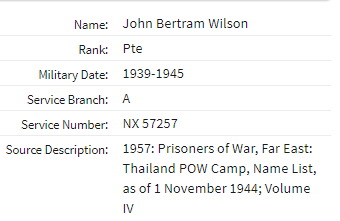 ​After returning home they had the following children:

Their marriage ended in divorce. Eleanor married in Melbourne Victoria in about 1967 to Eric Hubbard (no details available).

Eleanor died on 24/12/1987 in Victoria under her married name Hubbard.