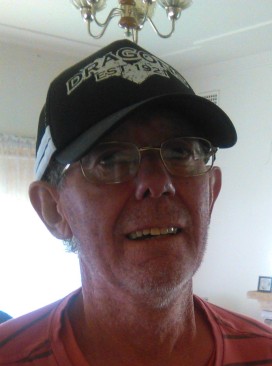 ​He never married. His family was everyone that he bumped into or helps out or spend time to chat to. He served the wider community through St. Vincent de Paul.

​Paul died on 05/09/2015 in Waratah West. He was cremated and his ashes interred at the grave of his mother and grandmother. 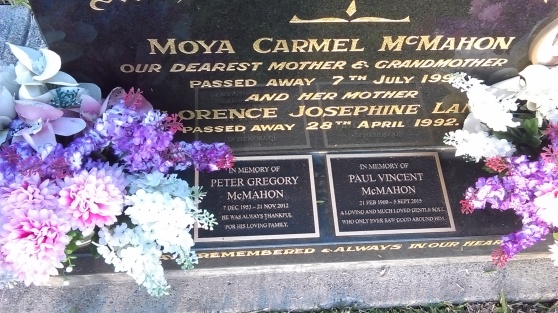 Paul Vincent John McMahon was born prematurely on the 21st February 1960 at the Mater Hospital Waratah, Newcastle. He was the fourth child of Peter and Moyah. Paul’s first year of life was a milestone of development following his challenging delivery and birth. He grew to be strong and hardy and as the baby brother of Jane, Mary Therese and Peter and was smothered with love, hugs and many kisses.

From an early age Paul’s main playmate was his older sister Mary. They had a love-hate relationship where he was either teasing and tormenting her, or she was his best buddy. His second mother was his even older sister Jane, who found in him a living doll” with whom to play. Jane would take him for walks in the stroller and would help in feeding him. In later years Paul would say that when Jane fed him it was always one spoonful for Paul and two spoons for Jane, which explained why he was so small and skinny. Paul’s brother Peter found in Paul a perfect cricket “goffer” Peter would always manage to get Paul, when they played backyard cricket, to bowl him one more over and to chase down the balls for him.

When Paul was three he received a treasured fire engine as a birthday gift and his mother made him “sailor suit” that given who Paul was didn’t stay clean for long.  When the big kids went to school Paul formed an alliance with ‘Victor” the only other kid in the street that was Paul’s age. Victor and Paul became the street “mini-terrorists.” If they weren’t throwing mud at the neighbours’ prized possession cars, then they were smoodging food and drinks from the street’s soft touch “Josie Blackford.”  At another time Paul created havoc with the neighbour’s new concrete work, when he cut his foot on a bottle and proceeded to their house leaving a trail of blood all over the new work concrete and veranda. Roaming the local neighbourhood, teasing others in good fun, playing practical jokes and playing in the local park were days of freedom and harmless fun for Paul.

Paul’s schooling in his early years was at St Columban’s School Mayfield and was mostly without incident. When he changed schools to Corpus Christi Waratah at age 10 where he formed many new valuable friendships and saw him develop a ‘larrikin alliance” with one of his many long-term mates Brian McDermott. Paul and Brian’s friendship continued through their high school years where they were constantly causing distractions in the classroom and the playground became a magnet for practical jokes. In the ensuing years Paul and Brian’s friendship and antics could be best described as “rascally behaviour,” which was not just restricted to the school grounds but became the bane of the neighbours, who constantly failed/refused to return the cricket balls that were deliberately landed on their property. Other mayhem adventures included ambushing the motorists taking a short cut down the lane at the back of the family home in Station Street which involved spraying the cars with the garden hose and with some luck the drivers as well.

Paul left year 10 high school aged 15 and enrolled in a pre-trade carpentry apprenticeship course. In so doing he retraced his grandfathers’ Lane’s footsteps as they were both carpenters. In 1975 when apprenticeships were hard to come by, Paul through good fortune and skill landed one of the few available apprenticeships, with Jennings Industries. He was chosen from some 200 odd applicants. Following three years on the tools he completed his Clerk of Works course and became an estimator with Jennings. When Jennings relocated to Sydney, what Paul did not enjoy, he returned to work at Monier Edgeworth for five years which was followed by 10 years at BHP Refractories. Following the downturn in the steel and the closure of BHP Refractories, he worked as part of the union negotiating team to assist workers to gain their entitlements.

While Brian settled into family life Paul continued “making fun, playing practical jokes, being the life of the party, and becoming an all-round “funster” which became the trademark of  his personality.  Paul’s friendships group include many, formed through sporting, work, club and church involvement. These friendships became Paul’s “family” as he did not have a significant other in his life. People from this community family included Scottie Parsons, Tim O’Brien, Al Lyddiard, ‘big John’ Medanzic and wife Bridget, Christine Schofield, Terry McMahon, Mark Scobie, Allan Ball and many, many others who loved him as well as he loved you all.

Other examples of Paul’s wide and varied social contacts and the abundance of Paul’s friendships, are the meeting at the shopping centres. When we went shopping with Paul it was unusual if he did not meet at least three or four people that knew him and stopped to chat. These shopping contacts were proof of why he earned the nickname, “have-a-chat Paul,” or to those of Norman street where he lived where he was affectionately known as the “Lord Mayor of Norman street.” He enjoyed the talks with and chats to his “family” in Norman Street. He most recently enjoyed using his knowledge of the building game with those in his street undertaking building activities as in the case of Peter. Wasn’ het strolling up and down the street you would find him reading the paper across the road.

In his younger years Paul devoted many Saturdays to coaching and training junior teams for the Waratah Leagues Club and helped in a range of positions on the club committee. Sport was a major source of enjoyment for Paul closely followed by the soaps on TV and programs such as MASH. His sporting fan interests included all the teams named after the “Saints” such as St George, St Mirrens and St Helens in England and St Kilda.

For much of his younger adult life Paul lived at home with his parents. During this time and with his mother Moyah’s, careful management of his personal affairs, he was able to maintain a set of tools for his carpentry work , to get his first motor bike, his prized Valiant station wagon, his fabulous green Mini, for which he still is remembered by many.

As a result of the continued direction of his mother Moyah, by the age of twenty-six he had his first home in Croyden Street, Mayfield. Some years later and again with direction from his mother he purchased his last home at Waratah in Norman Street.

Following his forced retirement in the late 90’s Paul maintained his involvement in the community by accepting the support of the Corpus Christi church community and the local conference of St Vincent De Paul. The shared friendships and contacts at the weekly meetings, the visits on behalf of the Society and the helping hand at the church and the St Vincent De Paul call centre gave him an important social and belonging feeling. The strength that Paul drew from his church faith was especially important to and poignant for him.

Another aspect of Paul’s beautifully rich yet basic and simple life was his love of politics and his long term political commitment to and support of The Australian Labor Party. His ability to connect with the people in general and the community at large community led him to be a polling booth supporter at many elections and over a period of some twenty five years. He was proud of the fact that he had been on the Waratah West public school booth for 25 years. Sometime a little under the weather but he was there “RAISING THE FLAG”.

Paul’s enduring and endearing qualities were his great sense of humour, his willingness to help anyone and everyone as well as his genuine kindness and friendship. His credits are the time he gave to junior sporting coaching and more recently through his commitment to the philosophy of St Vincent de Paul Society “DOES GOOD WORKS…HELPS OTHERS” with whom he shared his time generously. He continued a long tradition of his ancestors in serving the church and community.

The strength he gained from his community and involvement and commitment to others in times of need rightly earned him the monikers of “loveable larrikin” a “good Bloke” and a kind hearted person. He had his weaknesses but to us he was a wonderful brother and uncle! For Paul his family was everyone that he bumped into or helped out or spent time with or took the time to chat to. He has left behind a very large family of kin as well as community. He could be loosely and affectionately described as a “knock-about modern day St Vincent de Paul-an Apostle of Charity.

Recently I read a quote on one of the social media which I want to share with you and it read:

WHEN SOMEONE YOU LOVE DIES YOU NEVER QUITE GET OVER IT

YOU JUST SLOWLY LEARN HOW TO GO ON WITHOUT HIM

BUT ALWAYS KEEPING THEM TUCKED SAFELY IN YOUR HEART